‘Coming a Veg’ has been a monthly series which highlights vegetarian and vegan “coming of age” stories. To wrap up my first year as a vegan, I am sharing a bit of my own history of when and how I became a vegetarian.

————————————————————-
It is hard for me to remember eating meat. Although I can frequently taste when an animal product has contaminated the food I am eating, I have to strain to remember the actual ingesting of a hamburger, shrimp or chicken piece. That is because it was almost 40 years ago. I was amazed at the memories that came flooding back once I started to think about what I went through during my first decades as a vegetarian so I apologize that this post got as long as it did.

As I share on my bio page, Central PA Vegetarian, “It was only with the patience and love of my parents that I, as a teen at home, was allowed the luxury of being served separate and healthy home cooked vegetarian meals.”

I took a look through some photos of myself around the age I decided to give up eating meat. I found photos from 1974, the year before I became vegetarian, fishing and shooting a gun. The images are so foreign to who I am now that I stare at them and struggle to remember what it felt like being that person. When I tried, I realized that a lot of my transition from meat eater to vegan was peppered with less supportive moments than I had remembered. In actuality, it was a rare person outside of my immediate family that ever was accepting.

It is an odd tween/teen that doesn’t love animals and have a certain amount of compassion for them, I was no different. I do remember the moment I committed to not eating meat and it started with my care for other species. My sister, then 10 years old, challenged me with, “You know there is a cow in your soup.” It was all about my favorite soup, it had a huge hunk of stewing beef in it. I imagined it as a tiny whole cow, much like the small plastic animals I loved playing with. It was wading through a sea of peas and other wonderful vegetables and I couldn’t eat it. That was the turning point for me.

My transformation was gradual and over the next 3 years gave up everything but egg and dairy products. I tried to take the next step but when my dog, who loved spaghetti with anything on it, turned up his nose as my tomato only sauced pasta I took it as a sign that vegan food was terrible and went back to eating eggs and cheese until a year ago. 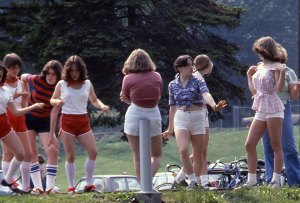 1978 – Waiting backstage to dance at our local arts festival. Me in red shorts, my best friend leaning on the post and my sister to her right were all vegetarian at one point or another.

As a lacto-ovo vegetarian teen I do remember the challenges of eating in the high school cafeteria. I ate a lot of cheese pizza, mashed potatoes and corn. Hanging out at the fast food burger joint after school with friends would test my resolve. The gal behind the counter would make fun of my request of a cheeseburger, hold the burger. She would shout into the ordering microphone some lyrics from the newly re-popularized Rubber Biscuit, “Have you ever heard of a ‘wish sandwich’? A ‘wish sandwich’ is the kind of a sandwich where you have two slices of bread and you wish you had some meat.” The place would burst into laughter and I would want to crawl into a hole.

Waving a red flag as I loathe following the girl who made fun of my being a vegetarian.

I now know that there would have been teasing even if I wasn’t vegetarian but, as a teenager, my perspective was limited. I changed from being an outgoing youngster to a much more introverted person and kept my vegetarianism quiet for the most part. I skipped going to social cook-outs that other marching band members would throw after they joked about having a “head of lettuce” set aside for me.

I survived and so did my resolution. My choices influenced some friends to, at least temporarily, try vegetarianism. My sister, best friend and a few other friends tried it on for size and I know at least two friends who are still vegetarian and their influence has encouraged many others to permanently stop eating animals too. I was amazed to recently realize that the connection between my choice and decisions and other vegetarians I have thought totally unconnected to me have, in fact, turned out to correlate directly.

An unwitting trail blazer, I wish it had been a smooth path for me to travel after high school. My vegetarianism caused me firm enemies who felt personally threatened by my personal choice. One 20-something fellow insisted that, through accidental cuts and scrapes (and probably my menstrual period), I would eventually run out of blood because I wasn’t ingesting any to replace it. He refused to talk to me because he thought I was the most foolish person he had ever met.

1984 – My wedding day with Jim, best friend beaming at us. We were all vegetarian at the time.

The small mindedness didn’t reserve itself to only the steel-working town I was raised in; as a student at Penn State University I found there were still hurdles to leap as I navigated the rough path of vegetarianism. Attempting to find support through community, I tried to reach out to a new local animal rights group, Trans-Species Unlimited. Instead of being welcomed, I was belittled by founder George Cave. Then a writing professor at Penn State who was heavily influenced and called to action by the words of bioethicist Peter Singer, Mr. Cave had no time for anyone whose views weren’t in perfect alignment with his own. A very angry individual, he was better at stirring up confrontation with people rather than sharing information or leading by example.

Me and my newborn son. He was raised as a vegetarian and grew into a healthy young man.

Happily, I started dating Jim, classmate from high school and good friend. He and I moved in with a couple of other friends in what was to become something of a little veggie commune for a while. As he shared in his story, ‘Coming a Veg’ – A Life Defining Moment, Jim’s family didn’t take well to his choosing vegetarianism.

After we married, they constantly tried to undermine us by refusing to tell us what was in the food they served at family gatherings. When I became pregnant, they felt we were certainly doing damage to our unborn son by my remaining a vegetarian. As hospital lab technicians/ manager, they went so far as to helping themselves to my blood results but failed to prove I wasn’t getting enough iron. They also used my placenta as a lab joke by saying you could tell by the way it looked that I was a vegetarian.

Our son was a very healthy baby and grew into an active and cheerful toddler. In the mid to late 1980s, we struggled against opinions that we were hurting him by, “not letting him eat meat.” At a neighborhood gathering, I found myself exasperated with such outrageous claims that I responded by saying, “Eventually he will also have the freedom to smoke cigarettes but I am not going to light one up for him now.”

1988 – Our first car’s vanity plate, “VEJJIE.” Even though it estranged some family members, we raised our son as a vegetarian.

As our son grew into an active boy, it was obvious to everyone that we weren’t doing him damage. Unfortunately it took totally cutting off relations with Jim’s father (more issues here than just the veggies ones) that curtailed his gleefully feeding our unsuspecting son meat. That lead into the 1990s which seemed to open up so many more choices in the grocery store, ones that fed our happy family.

In retrospect, the rest of my vegetarian adulthood and my last year as a vegan has been a seamless shift. Over the decades I can see my lead has caused some ripples for what I would say is to the good. The trend of more accessible vegetarian and vegan foods, restaurants and support in the United States may ebb or moderate but currently I am thrilled with the direction things are going. We’ve come a long way from the couple of vegetarian cookbooks on the shelves of the local bookstore and I like to think I had a small hand in that.
————————————————————-

The first Monday of each month this year, I featured a new ‘Coming a Veg’ story and would I love to hear yours! If you are feeling shy, your story can be posted under a creative screen name, anonymous or at least pass this request along to any other groups or individuals who may be interested. Find more information at this link or send submissions to my email: Pennsyltucky Veggie.