Inspired by the many Pennsylvania Dutch hex signs, we took the Bacon is NOT an Herb logo and transformed it into Hex Signs used for these annual awards.

From 2011 – 2014, these awards were given to highlight some of the best veggie dining in Central Pennsylvania. A wonderful place to live but finding the best vegetarian (let alone vegan) dining in the area was next to impossible for decades. Thank goodness almost every restaurant is now aware of many different dietary needs. I like to think these awards played a small role in that awakening and awareness.

2014 Pennsyltucky Veggie Awards will remain local, limited to the counties that are touched by the keystone center of our state illustrated below. The awards recognize the year’s best vegetarian foods available in our region by highlighting a few menu items from restaurants I have been able to visit this past year. I hope I will get suggestions from readers on favorites that I have overlooked for 2014. 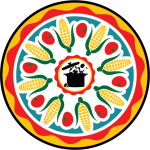 This year, the categories include region’s best Appetizer, Soup, Portobello, Chili, Veggie Burger, Specials, and Vegetarian Restaurant. Extra emphasis will go to dishes/restaurants that use local ingredients and are created in-house.

Decisions are made from what is offered on the regular menu with limited “hold the pickles, extra lettuce” high maintenance tweaks. To stick with the BK theme, realize I won’t be including large franchise restaurants so don’t expect the BK Veggie to be garnering any awards.

2011 and 2012 Pennsyltucky Veggie Awards recognized this region’s best in past years. Congratulations to those who have the been awarded for their Portobello, Veggie Burger, Soup, Salad, Appetizer, Specials, Menu, Ethnic Restaurant, Vegetarian Restaurant and Best Restaurant.

Do you know of a Pennsyltucky restaurant or menu item that you think should be considered in 2014? If it’s in central PA (see map below) and is a regular vegetarian menu item, let me know and I will include it in the judging next year! Drop me, Pennsyltucky Veggie, a line or feel free to leave a comment on any of the awards pages!